Integrity and Commitment in Working

Integrity is one of the main attribute/key that shall be possessed by a leader. Integrity is a concept related to consistency in actions, values, methods, indicators, fundamentals, and various things that has been produced. A person with integrity means a person with honest personality and having a strong character. Integrity itself comes from Latin word ‘integer’, which means: 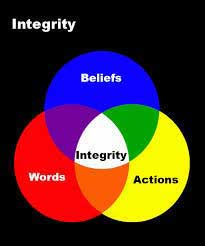 Jack Welch, in his book called ‘Winning’ said, “Integrity is a vague word. People    with integrity speak the truths, and people hold their words. They are responsible of  their actions in the past, admit their mistakes and correct it. They know the  applicable law in their respected countries, their industries, and their companies -  either it is written or not- and obey it. They play to win in a respected way, based  on the applicable law.” Most of the surveys and study cases have been identified  that integrity or honesty is a personal character which is desired by every leader.

Dr Kenneth Boa (President from Reflections Ministries, Atlanta) described integrity  is an opposite of hypocrisy. He said that a hypocrite person is not qualified enough  to guide other people to have a good character. There shall be none of the people  will give respect to a person who talked about a good play, while himself are failed  to show how a good play is. What is done by the leader will have a greater impact  to the people that he lead rather than things that he spoke. A person can forget 90  percent of things that has been told by his leader, but he will never forget how his  leader does. If we talk about integrity today, we will refer it to the terms that  related to ethics, moralities, authenticities, commitments, but what we really need is a clear comprehension about a real concept of integrity. Integrity is dealing with a wholeness and conscience of a personal -quality of a real self in every person.

Integrity is needed by anyone, not only for the leaders but also the people that he leads. People need guarantee that their leader is trusted if they must become his followers. They are so sure that a leader will care about the need of every single team members and a leader must put a trust that every person in his team members is doing their responsibilities. Both of the leader and people that he leads want to know that they will fulfill their own promises and never violate their commitments. The people with integrity will never want to violate the trust that has been put by the people to them. They will always choose the right way and take side to justice. This is the sign of integrity. Telling the truth with responsible, even though they are unpleasant to tell.

Actually, these two terms has a similarity, such as that both of these become a source to create a trust for a leader. The difference is credibility regards to the ‘head’ which is a mind power that consists of intelligence, skills, and competencies (hard skill) while integrity regards to the ’heart’ which is a conscience power that consists of honesty, sincerity, commitment, and so on. Credibility builds from two main elements, such as capabilities and experiences. It will be hard if a leader doesn’t have a competency and experience in his respective field. Whilst integrity builds from three main elements, such as values that have been embraced by the leader, consistency, and commitment. These values will become a guidance of every leader’s action. These integrities will become more solid if the leader has a consistency between the talk and the action (walk the talk) and have a commitment with it. If we don’t have integrity, we will lose credibility and the people will avoid us to avoid further disappointment.

Commitment, based on Indonesian dictionary, is a pledge to ourselves or to others which is reflected by our responsibility in things that we do. Commitment in daily life is expressed by an ability to do things. Commitment contains continuity element. Which means, we are willing to fulfill our promises not only today, but sustainable and continuously until they are done. Commitments start with a word, and make it happen by doing exactly like the talk. This is a challenge for us in making commitments. So, ‘walk the talk’ is doing what you have been said. Make sure that you don’t promise things that you cannot keep. A real man will fulfill his own words. This is a beginning of the emergence of self-confidence inside ourselves and from others.